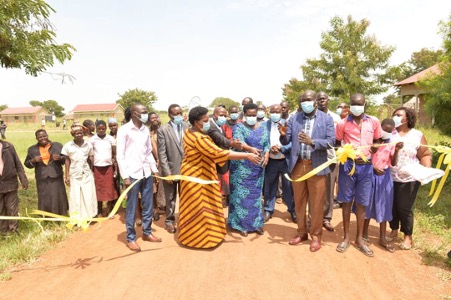 The road is part of the Local Economic Growth (LEG) program under Local Government that is benefitting 13 districts. The road is expected to fulfil the main objective and anticipated outcomes of the LEGs project that feed into the implementation of Sustainable Development Goals of Ugandan Government Vision 2040.

The construction rehabilitation and upgrade to 1st class murram is a big boost to security and trade especially between Katakwi and Karamoja.

Speaking at the ceremony, Vice President Alupo commended the Ministry of Local Government represented by the Project Support Team Coordinator, Eng. Paul Kasule Mukasa, who supervised the project, said the road would enhance and enable security forces to do their job effectively.

“The road will help our forces to move faster, do a better job, and help in the increased fight against cattle theft”, she remarked.

The Vice President commended the President for ensuring that all sub-counties across the country are increasingly accessible and linked through such initiatives.

“This road will help us do business much faster than before, it will help school children access school facilities, help mothers and the sick access faster medical care and will solve the problem of ‘hard to reach and hard to stay areas syndrome’.

Secondly, she added, the road would enhance increased social services like an extension of electricity and water facilities to the villages.

“As Government, we approved sh700b to upgrade and rehabilitate all security roads in the entire Karamoja region and all neighbouring districts, and the government will continue to ensure that we have improved services including a primary school at every Parish, a fully-fledged functional secondary school at every sub-county, a borehole in every village”, Alupo said.

The VP thanked residents of Ngariam County for continuing to support President Y.K. Museveni and asked them to support government programs including the Parish Development Program. (PDM).

She promised to initiate development-oriented awards to the three best-performing parishes in the implementation of the PDM. “It is now time to unite and use all our ideas to eliminate any kind of poverty from our homes”, she said, while requesting residents to prepare to plant early with the expected August rains in order to fight hunger.

Alupo also urged locals to stop cutting down trees, bush burning and hunting wild animals which are tourist attractions. “When you burn bushes because you want to trap animals, this destroys the soil fertility and tampers with the ecosystem and environment”.

The vice President also commended the security teams for restoring sanity to both Teso and Karamoja regions.

“Now we can breathe again,” she remarked, telling them to work harder in returning the remaining 92 cows that had been raided from the area two months ago.

On cattle compensation, the VP said that the exercise would continue until everybody who is a valid claimant is compensated.

At the same event, the Minister of State for Local Government, Hon. Victoria Rusoke Businge thanked the VP for heeding the President’s call of working with and for the people and for being practically on the ground to improve service delivery.

The Minister also added that since all LC3’s received motorcycles and LC1 chairpersons received bicycles this was sufficient empowerment to local leaders to monitor government programmes.

Rusoke further commended the Vice President for being at the front in implementing different Government programs and for the continued spirit of cohesion, peace, and unity. She also encouraged the people to become whistle-blowers in the protection of Government funds because “all those stealing government money are the real enemies of our country”, she added. She promised continued support from the Ministry of Local Government to different community development programs in districts.

The LC5 Chairperson Katakwi District Geoffrey Omolo, appreciated Government efforts to ease service delivery, citing previous delays in moving and monitoring of national exams, and the fact that soldiers used to walk over 70kms a day on foot patrol. The road will improve accessibility and boost trade.

The launch was attended by, Ministers Roselily Akello of Ethics and Integrity and Asamo Helen of Gender for disabilities who called upon the people to unite and support Government programs and unity among the people if they dream of a better Uganda. 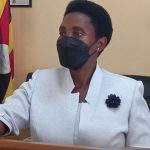 Previous:
There is a need for low-cost housing in Gulu City